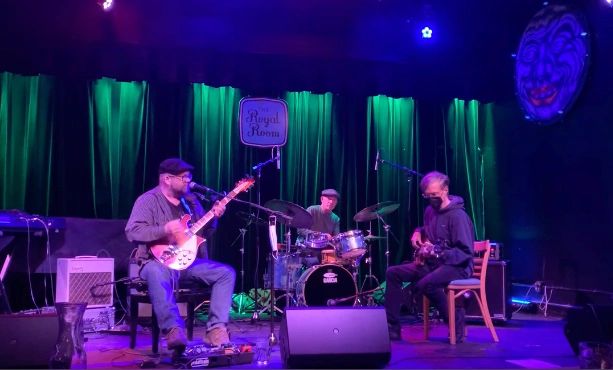 Lazuli Shoals is looking for venues to gig. Meanwhile getting new material ready to start a new Collection as well as explore a single. We are working hard to gig now that the Covid Cloud has been tempered. Meanwhile I've been reaching out to folks in the music trade to find support! Here's a review from the the folks at RADIO AIRPLAY:

Lazuli Shoals is looking for venues to gig. Meanwhile getting new material ready to start a new Collection as well as explore a single. We are working hard to gig now that the Covid Cloud has been tempered. Meanwhile I've been reaching out to folks in the music trade to find support! Here's a review from the the folks at RADIO AIRPLAY:

Overall Impression: The Woo is a new release by Washington-based Lazuli Shoals. Musically, The Woo is powered by several acoustic and electric guitars weaving in and out while keyboards, bass, and drums all provide solid support for front man Thomas Armstrong. Lead guitar lines and fills pepper the song nicely over a laid-back tempo. Armstrong has a congenial voice that gently floats above the band. He has the sound of one friend singing to another. Lyrically, the song speaks of two people moving together, testing each other's resolutions, and the enigmatic "Woo." Overall, The Woo by Lazuli Shoals is an encouraging folk-rock tune that warms the soul and lets minds wander.


Strongest Point(s): The instrumental work is very well done. Nothing seems out of place, rushed, or distracting. It all serves to support the vocals while maintaining intrigue.


Area(s) of Improvement: Overall, I think your mixing is pretty good. I would chop off the few seconds of silence at the beginning, as well as the count off. The keyboard could be a bit more prominent - the guitars are kind of burying it. Personally, I prefer if the panning isn't so far into one ear or the other. Maybe an an 80-20 split for an instrument you want featured, rather than the 100-0 split you have now. But the instruments all sound clear and well mic'd, and the vocals are quite nice. Overall the sound is very warm, and reflects the mood you have composed. I've marked "needs improvement" in the Recording Quality box, but overall think it is well done.


Target Audience Appeal: Fans of Folk, and Folk-Rock will enjoy The Woo by Lazuli Shoals.


About The Reviewer: Zachary Larson is a professional touring guitarist and multi-instrumentalist. Getting his start in high school rock bands, he has since toured internationally as a classical chamber musician, in the show band onboard luxury cruise lines, and with the broadway musical Finding Neverland. His recorded work spans from classical works and jazzy holiday tunes, to mind-bending experimental music. His arrangements of orchestral music are published through Clear Note Publications. Classically trained, he holds a Master of Music degree from the University of Denver.  Vocals:  Strength
Lyrics:  Strength
Instrumental Performance/Execution:  Strength
Melody/Rhythm:  Strength
Arrangement/Flow:  Strength
Recording Quality/Overall Mix:  Needs Improvement

Thank You for stopping by!!

In 2019 Lazuli Shoals produce our first nine piece album, Brooding. We started recording in January, 2018 and currently receiving mixed reviews. We submitted three pieces from the album for wide distribution to find favor with the nation's college airways. Here's how a lot or the replies come back;

Dear Lazuli Shoals,
I appreciate your artistic talents - just not quite right for my audience.

Thanks and good luck!
World Mix Inet A MusicSUBMIT Reviewer

But then again we get a few positive notes as well;

Please send up to three Tracks by email.
Include Meta Data and Art if you want to sell your music.
Include where it can be purchased / downloaded.
Go here to see how this works:
http://listen.samcloud.com/w/87987/Dynamic-Indie-Radio/?play=y#history

Up and Coming Shows

News from the Lazuli Shoals usually goes out at the 1st of each month. Thank You for signing on!

Sign up to hear about upcoming shows, albums, and events.